Home » Uncategorised » Sunday 14th – “If this is winter flying, bring it on”

“If this is winter flying, bring it on” summed up the flying for the fortunate few who turned up.  Someone else said “return of the summer” and was promptly corrected to remove the word “return”.  They say a picture is worth a thousand words so here is a picture of the launch point. 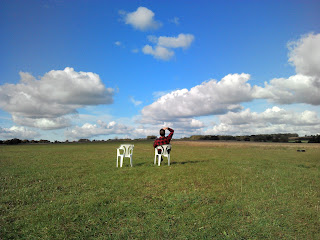 First launch of the day was 50% longer than the previous days longest flight and the second one was 8 times longer.  Half a dozen flights of around and hour and more.  Early launches (around midday) had to work hard to use the weak broken lift to get to cloudbase at just over 2,000′ but within a couple of hours pilots were getting climbs of 4+ knots up to 3,700.
Duty ab-initio Selvam M kept duty instructor Tim R busy and the 2 TLs and one returning TL were looked after by Peter E and Richard D.  Despite Tim’s onset of vertigo (what else would account for Selam’s failure to get to the top of some launches) we clocked up 10:41 flying time off 20 launches.