Following the rather splendid previous day (34 launches, 10:47 time flown and 28 people taking to the air), Sunday was much more modest in numbers and wind strength.  Wind still from the north but not enough to provide any lift on the ridge.  However, 11 of us clocked up almost as many launches as the previous day (just 2 shy) but just under half the time.  Mind, 3 strop failures on successive launches didn’t help the average flight time.  The winch driver reported a noticeable surge at around 1,000′ on the launches around this time, for some the weak link held but for others it didn’t.  About midday Nigel B set the bar with a 2,100′ launch in the K8 to clock up 16 minutes.  Couple of hours later (having completed a few check flights and no one looking for my services) I jumped in the K8 but only 1,900′ launch.  On return I was surprised to be informed I’d upset Nigel by pipping his longest flight of the day by 1 minute.  He made a couple more attempts to regain poll position but was greeted on landing by a (not very tuneful rendition) of “Only 16, only, and I loved her so-oh-oh” by Chris K.
We were treated to an interesting sky that a coupe of members described as “just like the White Cliffs of Dover, but suspended in the air”.  Out of our reach to go and explore unfortunately. 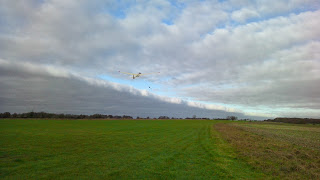