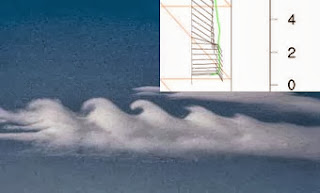 Patches of lift interspersed by areas of severe sink suggested wave activity. Cloud base c1800 – tops 2500ish. Inset shows wind shear at Larkhill at about the same time. Apparently this is Kelvin-Helmholtz instability, rotary motion of air close to cloud tops caused by the interaction between different atmospheric streamlines (like wind causes waves on the sea). Interesting, but totally useless – longest flight 17 mins.