Arriving fashionably late on the airfield on Wednesday I was pleasantly surprised to see that the midweek crew almost had the field set up and HAX trailer was parked at in the rigging area. ‘Just as well you got started early’ says I ‘cos it’ll all be over by one o’ clock’. HAX was hastily rigged and by 11 o’clock the entire club fleet was on the line, by which time the sky looked like this: By midday Selvam and I were looking down at a deserted launch point.

By half past twelve the sky was beginning to look like this: 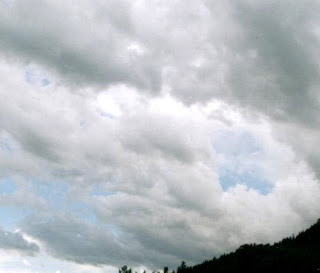 at which point the five gliders that had been soaring for an hour or so all landed for lunch. By this time the afternoon shift had arrived, so Stephen and I spent the rest of the day inflicting some serious ‘bung pulling’.

There may be a moral here somewhere….