With miserable March disappearing over the horizon Saturday morning dawned promising a  change in fortunes and the good soaring conditions which were forecasted a few days beforehand didn’t let us down.

The change in the weather brought many members out of hibernation and the parking area was full by late morning. 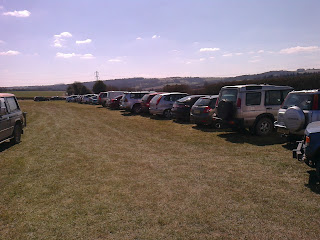 First flight to test out JPC after it’s ARC renewal was at 9:30 the launch taking me to 2,100 ft with cloudbase at 2,800 ft. As the day progressed the lift and cloudbase increased to such an extent that we had to put a limit on soaring as it was quite possible to stay up for quite some time.

With all the club gliders in the air at once this was the scene at the launch point.. 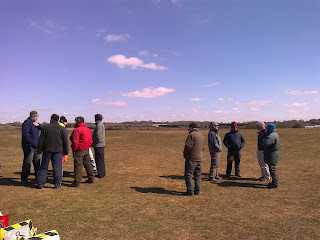 With good launches and strong climbs to excess of 4,500 ft we managed 42 launches with 18 flights managing a flight of over 1 hour.

Chris B and Nigel B took the Puchacz on its first XC flight of the season to Lyneham and back surprising us all by returning by air 🙂 Jim C took the Nimbus for a run round Devizes, Didcot and Oxford, Richard D took the LS3 away for a few hours and Darren M took me and JPC (almost) to the M4 junction at Hungerford at a reassuring (but unnecessary!) 4,800 ft 🙂