An exceptional day for the back-end of September with climb rates of 6+ knots reported up to 3,700′ (QFE).  Just a pity there were so few members there to enjoy what the day had to offer.
With 4 gliders being rigged and so few folks around first launch wasn’t until 11:30 when Bob B (duty instructor) decided that if no one needed his services he would take a launch into a largely blue sky.  Bob stayed up so James H took the club Vega and he didn’t immediately return.  This was enough to tempt the private gliders on-line.  I took the next launch (LS3-17 in 15M guise) and struggled gaining a few hundred feet before returning to launch height (1,100′ thanks to the crosswind) or less several times before getting away.  Later in the afternoon there were some magnificent looking cloud streets but there were also some extended areas of strong sink that kept folks on their toes.  Of the 20 launches 8 enjoyed flights of more than an hour.  Last launch was at 15:30 – still plenty of good sky left in the day but we’d run out of people to fly.
Meanwhile at the other end of the field Alan P was checking whether his reconstructed Olly wing might hold together in flight. 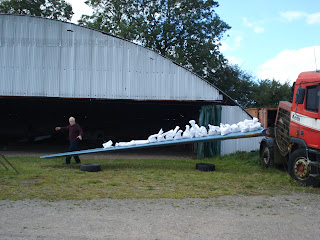 Bob took this picture and commented “Here is the better photo of Alan’s bending test of his Olympia wing using 445 pounds of sand. Obviously successful!  The wing was bending very little. The drooping angle was due to the fixing to the winch slipping very slightly”.
﻿