Good call by Colin to slip Wednesday 1 day as we were treated to that rare thing this summer – a decent day. Over half the flights (excluding the evening progress group) were in excess of half an hour.  Just a pity about the Olympic ceiling as the best sky was within the restricted area.  I managed to escape west into the unrestricted area near Pewsey and found this Olympic torch to the west of Marlborough. 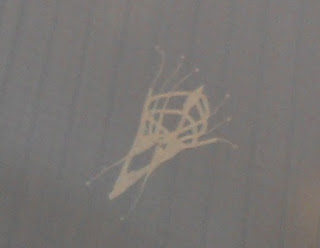 The lift from it was fairly pathetic but I stuck with it as it was very milky to the west and there was now no sign of lift on the route back to the club.  Straight glide back (and below 2,500 by the time I crossed the CTA7 boundary) not finding any lift until near the airfield.  After that it was simply running from cloud to cloud (each one worked!) and increasing speed in straight line to keep below the Olympic ceiling.
The mid-week Progress Group took over for the evening getting lots of practice in circuits and launch failures (Phil must have been suffering from vertigo).  Thanks to James H turning up and Paul P staying on we manged to keep 2 gliders on the go.