The early light showers cleared by 10am allowing the six of us who turned up plenty of decent flying.
With the wind straight down the strip launches over 1600ft were the norm.
Three trial  lessons were flown one even getting treated to a climb to 2500ft QFE. 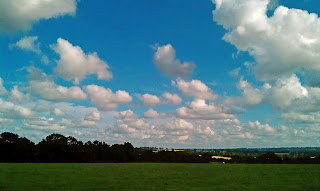 As the day went by the conditions went from good to stonking. Climbs of >4 knots were reported and flight times of more than 30 minutes were achieved. Plenty of showers were seen around us but none came near the club allowing uninterrupted flying all day. Strangely just north of the airfield conditions were very different to those to the south for most of the day as the photo of Chris and Jim landing clearly shows 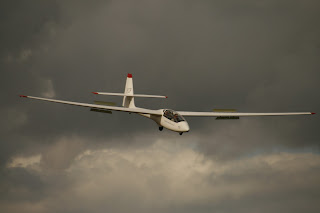 late in the afternoon Chris B turned up and took Jim McCormick for a short XC in the Puchacz taking in Burbage and Andover and enjoying the longest flight of the day with 53 minutes.