Those who turned up early with a view to getting the field set-up before it got too hot were thwarted by a bent and bruised winch that need some TLC before if could be used.  It was, therefore, just before midday before the first launch.  Colin took the Puchacz to explore the land beyond the green mist (i.e. he flew under the Olympic ceiling to the unrestricted area – and returned!).  Paul P set the benchmark for longest flight at an hour.  Steve B and I rigged our gliders (both struggling to get the wings on – lack of practice?).  I was not encouraged when Steve B returned in cHZD after 5 minutes.  However, the winch driver was kinder to me (thanks Paul) and delivered me straight into a gentle thermal that carried me up to our current limit of 2,500′ from where I set forth.  Cleared the restricted area and straight into a thermal.  On to Calne, pausing to climb and attempt to take piccies of a crop-circle.  Climbed above Calne to just over 5,000 and headed home.  Distinct lack of lift coming back – first hint of anything just south of the Savernak.  Slowed right down to gain a couple of hundred feet then nose down to return back under the Olympic ceiling at spot on 2,500 with 100 knots on the clock.  Wonderful when a plan comes together 🙂 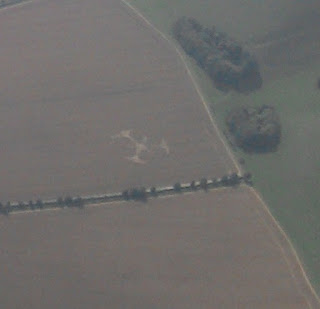 I’m pleased to report that Steve B’s 2nd launch was much more successful and resulted in the longest flight of the day at 1:19.  He had no trouble keeping below the Olympic ceiling as he sent time at 700′ (plus ridge height!) near Burbage picking fields (which, he avoided having to find out how good his choice was).
The Wednesday “Progress Group” was missing a few of the regulars but it did mean that Jim Mc and Selvan had lots of opportunity to practice circuits and landing on a just about perfect evening for doing so.