Pete and I have been at Lasham for the 2012 Regional Comp.
Unfortunately it’s been wet, overcast and mostly non-flyable. Yesterday, Monday, saw us all grid with Pete flying a DG505 with James Ewence in the A class, while I was behind waiting in the B class.
We waited, had tea, waited and eventually got to the grid and waited. First they scrubbed the Nationals. They lobbed the Regional A group into a rather bleak and grey sky at a little past 17:00 hrs BST. This was after a heavy downpour which soaked all. 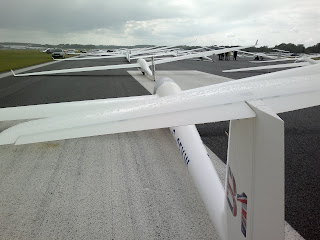 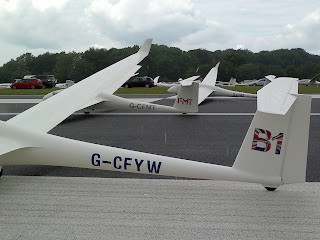 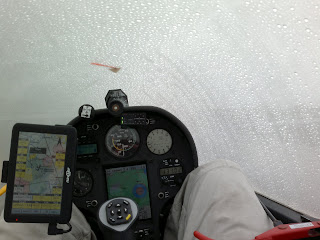 Eventually the A group made a start but under such a terrible sky it was inevitable that they were not going to all make it back. [Pete:my version below!]

Pete and James did terrific stuff but landed out near their first turn point.
[Pete: We launched at 17.04 and the air was thermic just to the north of the field, but the start just to the south wasnt, that wasnt much of an issue though and we head off north picking up some sort of convergence line running from aldermaston to hungerford and climbing well under it, trouble was the the tp was in dead air (this WAS an issue). We glid to a patch of brightness hoping to pick something up and sneak round the back – wrong plan! We should have just glid into the tp and out again directly. Having called ken from 1000ft, we landed in what looked like a strip but wasnt, at least 10km past the turn at six thirty, 5 gliders got round!]
It would seem Pete has joined the sign post club. 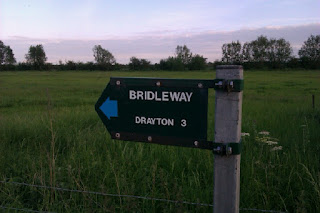 I received this on my phone about 20:30 hrs.
[Pete: we had thought we had landed at a strip, it wasnt so we decided to open Abingdon International Airport ] 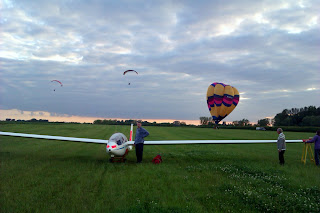 Ken Hansell has been camped out helping all of us and earning his keep with the retrieve yesterday. (Not that he’s getting a sausage for helping but we do appreciate it!). [Pete: please note sausages keep being offered and declined]

Today Tuesday has been scrubbed and it doesn’t look good until Saturday now. We will see!
Chris