With the Jubilee celebrations in full swing members attention must have been focused elsewhere but those who did come out to fly were rewarded with some surprisingly good soaring.
First launch was at 11:00 and the last at 18:17 and despite a brief spell of flat conditions mid afternoon we managed some 28 launches clocking up nearly 8 1/2 hrs of  soaring. If you allow for the period of yellow bung pulling (must stop doing that!) the flight times were not bad at all.
Carol won the honors with an impressive 56 mins in the Puchacz getting to 3000ft over Hungerford with Richard Greenaway a close second with 52 mins in the K8.

Congratulations must go to Mark Patterson for re-soloing after more than a two year lay off and for getting back in to the K8………well done Mark! 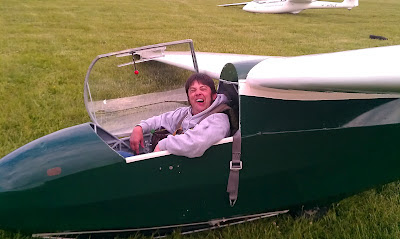 Other notable happenings were Nigel Burt starting his BI training and Richard Greenaway being signed off by Trevor to drive the winch…..no excuse now Richard!

We did keep a good look out for the comp pilots from Lasham who were initially set to route nearby but it seems the conditions were not so good over that way. We only managed to spot a solitary big winged thingy passing overhead on its way towards Marlborough as we were packing the hanger at 18:30 so maybe the expected task had changed. [Pete: Per Chris’ post above all classes but the regionals A were scrubbed. All 100 gliders were set to go but a shower came through and whilst we waited for the air behind to cycle time marched on. With not enough day left to launch the 15m class nations (they have a minimum task length of 160km) they could only get the regionals A away with a hope. A couple of open class guys launched to get some flying in, i think you saw a Nimbus 4DM which had self launched and had got up to Lyneham before returning (with some help from Mr Rotax)]