Sutton Bank: At Last We Fly

OK, so strictly speaking, Wednesday was not our first flying day.  Sunday, Carol and Phil worked away at getting everyone site and/or aerotow checked.  Tuesday, a few flew but only the Janus (Carol & Phil) and the Nimbus (Jim) did more than simply descend; Paul took his first aerotow solo and Jon took his first aerotow for 20 years.  However, on Wednesday all who launched soared.  Gliders (between ourselves and the Stratford club there were quite a few) were positioned in readiness to go on-line to the south of the clubhouse and pilots hung around or drank tea in the clubhouse waiting to see if it really would “pop”.  Before that could happen we changed ends and all the gliders returned to where they had been overnight.  I say “changed ends” – we moved half way along the runway and pointed in the other direction.  Not much wind to speak of but what there was was on our back.  It did mean we were launching over the white horse and one suddenly had lots of height if a low cable break was encountered.

“Enough of the ground manoeuvres, what about the flying?” I hear you ask. Hm, maybe the less said about that the better. With cloudbase between 1,800’ and 2,000’ and the most reliable area of lift above the bank there were a lot of gliders trying to cram into the 1,400 to 1,800 band in a limited area – not many of them Flarmed and the visually picking out gliders wasn’t that easy. Easy enough to stay airborne, most folks came back when neck muscle strain got to them. James W and Richard D exercised Sutton Bank’s Astir and Discus (respectively).

With the warm, long evening alfresco dining was the order of the day. We gathered in Thirsk’s market square where fish & chips and Chinese takeaways were on offer which were then taken to a select spot on the banks of the river. James W, having misprogrammed the turning point, ate his takeaway further upstream but on the homerun (for the pub) we meet back up with him. 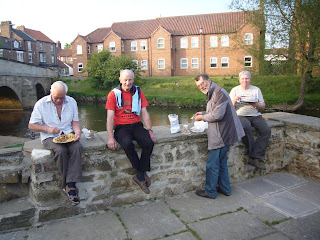 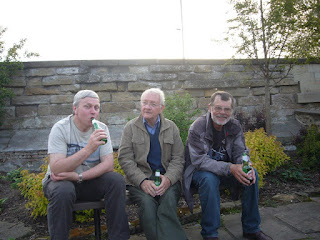 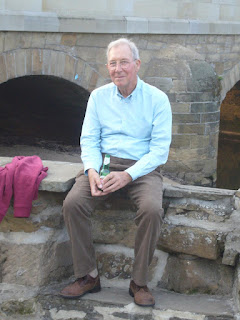