After waiting for some decent weather we were finally rewarded with light northerlies on Saturday. RASP looked good; the met gave a good report so Phil and I decided to pop around a 300km flight, each in our single seat gliders. We were (if time allowed) going to shove on an extra task if we could but the essence of the task was Birdlip, Rushden and back to Rivar.
We decided on as early a start as possible, that way we’d have the opportunity to add a further task on if we wanted.
Having got to the field and the dawn of crack we found James Hunneyman had beaten us to it!
We fettled, snapped wings on and generally got everything set and were ready to launch early.
A little later, having sent off the K13 we decided it was worth launching and took to the sky. 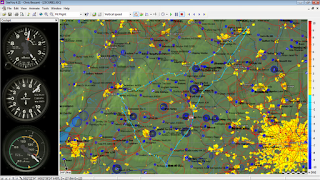 Leaving Rivar at around 2500 feet we tiptoed towards each taking it in turns to both lead and follow. I was constantly frustrated with being out climbed in the thermals by the LS3 but it was pointed out a little later that both the glider climbs well and Phil scratches like a dog with Psoriasis.
The sky towards Birdlip cycled and not in a way you’d like, turning to a scraggy horribly and grey mass. I got low and ended up scratching for the little lift there was next to Kemble. Hearing people on the radio sounding grateful for a half knot climb I realized I wasn’t the only one low and about to land. At 830 feet above the ground I finally latched onto a weak but stable climb, which took me both back up into the air but more worryingly across a forest of trees. It’s strange how you focus when so close to a mixed deciduous forest with a small escape field at either end. Up I went with the thermal eventually building into something much better and having called to Phil to carry on track.
I sulked a little for letting myself get low and headed towards Birdlip some 17km ahead. Rounding the TP I refocused and headed onwards to Rushden and with a good pace started chomping away the km’s.  After a while a familiar voice came over the radio asking how I was doing. I told Phil I had 85km to run to Rushden. To my amazement Phil said he had 110km to run! I wondered where he’d been and how on gods green earth had he sneaked behind me at Birdlip but it transpires he also got low getting the TP, of which the two Kens in the Duo Discus turned back from, Phil had  lost a lot of time there.
I do like a little schadenfruede especially when I later learned that Phil was watching me above the forest and flew away as he didn’t want his day (and 300km) spoilt by watching me land in the trees.
The day and the air got better and better and once we’d turned Rushden it was a relatively smooth run back for the last 125km, well that was until Phil got to Didcot and thermalled around the chimneys but even so managed a very respectable final glide of 40km at 62 knots and the best climb at Didcot averaging 5.5 knots with the vario hitting over 10 knots in places. 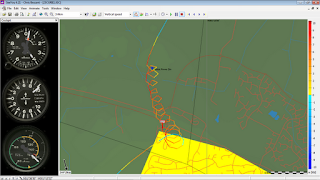 What a cracking day. [edit: by pete: shame you dont know which one – changed sunday in your title to saturday muppet!]