Good Friday? Sure was!

Home » Uncategorised » Good Friday? Sure was! 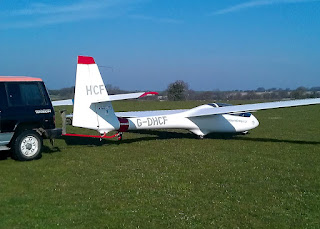 With the promise of a good day’s gliding and with the help of the early birds and the Puch’s new one man tow out gear the first launch took to the skies at 9.50.
At 10:10 Jim McCormick and I managed a 34 minute soaring flight and for the next 4 hours extended flights were the norm with 5 flights having in excess of an hour.
Paul Prentice flew a short soaring flight in the Puch and upon landing commented that the ridge was working so well he managed to fly in zero sink for quite some time before realising he had not turned on the vario!
Two XC flights were flown, Chris B in his LS7 loaded with water flew Devizes, Newbury and Nigel Burt (aided by Paul P) flew a more modest, but no doubt just as enjoyable, Hungerford, Great Bedwyn flight in JPC.
We also had a visit from Upavon’s DG1000 turbo. The two pilots phoned up first to ask if they could come over and sit in the Vega as they were looking for a glider that the could fit into as both being well over 6 feet tall glider selection was something of an issue.
Some time later the DG landed and the pilots duely tried the Vega for size. At this point I blagged a flight for one of us in the DG and after much arm twisting (OK so Rod jumped at the chance really) Rod was soon in the front seat with Upavon’s Alex Watt in the back. After a while showing Alex how to soar our ridge Rod finally brought the DG back.

A short while later the DG took a launch and after moving off a suitable distance started up the turbo and disappeared back off to Upavon.