Well OK, as Stephen has asked for an entry.

Keen members Nigel, Graham and Jon got there good and early to help Tim set up. Tim then duly dropped the pen when signing the DI book, and it found its way right down into the skid void. Despite the resultant delay, we got the first launch off just after 10.30, by which time a few more bodies had turned up. Jon did everything right and Tim sent him off for his first solo in 15 years – congrats to Jon. 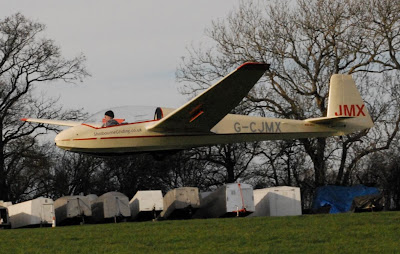 Then Graham did likewise, and was also rewarded with a couple more solos.

Meanwhile, the K8 pilots were getting 16-1800 ft launches, although it wasn’t particulary windy, and heading off to the west to try to out-do each other on the west ridge. Despite it being such a light wind, the ridge was giving some reduced sink, even lift briefly, so there were several flights considerably extended beyond a standard circuit.

All in all, a remarkably decent day for midwinter. The sunset tables now indicate that the sun will begin to set later (even though sunrise will also keep getting later for a few more weeks).