and as I collapse with my sherry after a hard day’s instructing, I look back on the day and it definitely falls into the classification for ‘Nice’. As I drove north out of Andover this morning I came up out of the fog, and, bar a small wadge of cloud that went through around 10-ish, it’s been sunny all day. And thermic.

As you may have seen from this morning’s e-post I was having a bit of a sense of humour failure when I was still on my own at just before 10am. Sunday lie-ins is one thing, but… However a flurry-ette of members arrived just in time to have the field operational in time for our 11am trial lessons.

Cloud was kicking up from first launch, but it took recent solo pilot Graham to prove that it was properly soarable on his 4th solo – Very Well Done Graham!!! While I was checking Graham out, Pete E was giving Andrew, a half-day course pilot, as much flying as could realistically be expected plus a bit, then dealing with our later trial lessons. I then flew with Jim and Evelyn both of whom took advantage of the soaring conditions and made good progress. Meanwhile an old member from the Ralph Jones days came and was escorted down memory lane by Richard.

We finally managed to wrest the K8 off Rod 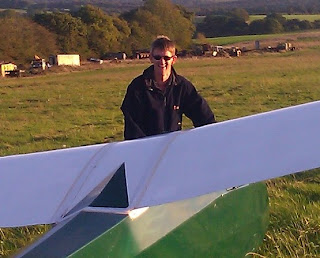 at the end of the day when the thermals wore out, at which point, much to his surprise, I stuck Graham into the K8 for a very nicely flown conversion flight. As you can see from his expression, I’m not sure whether he really liked it… Again, well done Graham!