A few of us had a good time at Sutton Bank a week or two ago at the Slingsby week. Alan P took the Skylark (clearly eligible), Rod took the Swales (not Slingsby, but Annex II and built in nearby Thirsk), Bill took the Ka6 (iffy but at least it’s vintage wood), and EUF syndicate took their Slingsby Owl, as Paul insists it is. John D, Bob, Alan B also came to fly, plus there were several wives and Andy and family looked in a few times during the week. 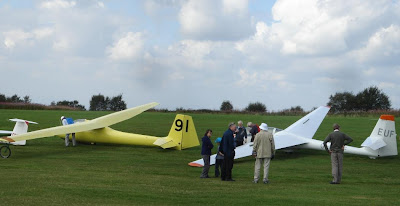 The first day was a winching day, with the wind on the ridge. It’s not like at Shalbourne – some people had terrible 80kt launches to 400ft before pulling off, everyone else let go even lower. Then those new to the site needed a bit of bottle to glide away from the landing area to find the lift. But the ridge was reliable and it was easy enough to climb high enough to get into thermal, some (not us) even got into the wave. Rod won the day’s duration prize – 3hrs in the Swales, off 3 launches with three different P2s. He had the log corrected (delete Swales, insert P****z) but not till after had drunk the prize. What a travesty.

High pressure then settled in, so no westerlies and unfortunately an October-type cloudy anticyclone, but we had a couple of days thermalling from aerotows. Alan collected the booby prize for shortest flight of 23mins – but remember at home that would often qualify as the longest flight. Of course, as soon as the weather saw us derigging at the end of the week, the wind finally went round onto the ridge.

But despite the poor ration of flying, it was a great week and a site to be thoroughly recommended.