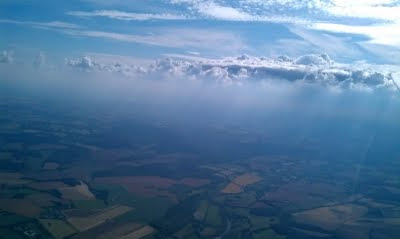 The week started off well with the Nimbus. Ls3 and Janus all getting round multiple 100k+ flights. Jim set off for RIV, LA5, DID, RIV with Colin, Carol and I in hot pursuit. Initially climbs to over 4000ft were common but approaching Basingstoke it went blue all the way to LAS and beyond. Loads of gliders waiting for a launch but not many getting away. A run in the blue out to LAS and back to Basingstoke took us down to 2000ft with organised thermals slightly lacking.

Over Aldermaston we climbed to 5000ft and headed off to DID which was reached reasonably quickly. The return leg to RIV as filled with sink and despite being 1000ft over glide we still found ourselves at 1500ft over Hungerford looking level with the airfield. Not enough height for a circuit so straight in for 127K 🙂

A quick rest then off again, a stonking climb straight off the launch took us to 5000ft so a quick run to SNO, WAN, KSB, RIV was declared for 107k. Over KSB we climbed to 6600ft just to be sure we did not repeat the previous flight and headed back to RIV which we reached still at 4000ft.
Not sure where the others went for their second flight so will have to update later.
Lets see what today brings.
Phil