Upon seeing that the Puchacz was staying up and even climbing on its first launch of the day Carol and I set ourselves Nympsfield-Newbury as our task. With the westerly breeze showing 20kts at height and with only a 2600ft cloudbase we set off on track. Lift was good in places but some clouds just were not playing ball and lured us into long glides in search of lift. We spent quite some time over Swindon just trying to stay airborne but as we were no longer within gliding range of Rivar pressed on.
It soon became clear that we would not reach Nympsfield so wimped out and landed at Aston Down instead. 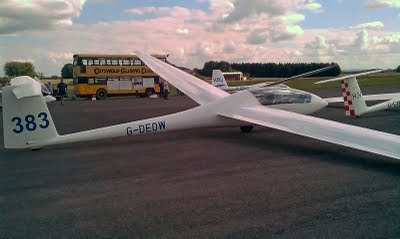 Within an hour or so the sky improved and it looked like the cloudbase was rising significantly so after refueling with a nice cup of tea we took a launch to test it out. Straight off the wire we hit a stonking thermal which took us up to cloudbase at 4500ft over the airfield so we headed back to Rivar. Two or three thermals later we were crossing the clubhouse at 120kts so no need for the retreive crew…………..yahooo!
Phil