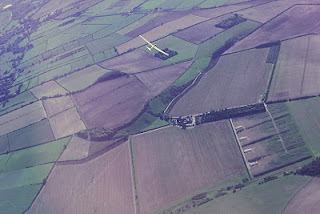 As I had not completed a 300k flight yet, Chris and I decided to set RIV,SHM,PAR,RIV as the task. The run to Shepton Mallet was not too bad but the lift was not quite consistent enough to really get a move on.

After turning SHM the run back to Frome was interesting! The lift we had left to run to the TP had done a runner and made us both really work at scraps of lift before being rewarded with decent climbs. At Warminster we headed south and followed the edge of the danger area round to Salisbury, keeping clear of Boscombe Down. It was here that we noticed that what little Cu there was had melted away leaving only a few wispy bits to aim for. 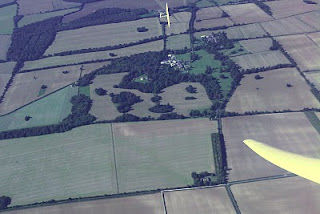 As we got further round the danger area the lift was more spreadout and harder to find. We decided to abandon the task near Chilbolton and make the run back to Rivar.
In hindsight we should have just hung around where we were and wait for the conditions to improve a bit because after we had landed it looked like things had improved and maybe we could have carried on a bit further.
All in all a very enjoyable flight just a shame we encountered the different airmass which caused us to wimp out. Still at least we managed to fly all the way round the danger area and flew just over 160K.