After conditions improved a bit I thought that as I was at 3000ft over Chute Causeway I would fly to Andover and take a few photos of my house (as you do!). 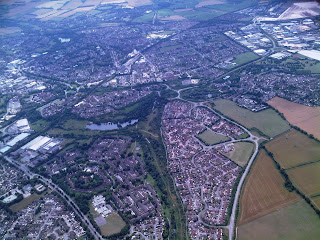 It was at this point that I had the idea to carry on to Chilbolton as I had only been there once before many years ago when Dave Owen, determined to land out in the Puchacz, took me for my first XC flight. I should have taken that as an omen as shortly after leaving Andover I encountered steady sink finally turning CBN at 1500ft and not finding any lift!
Looking below I noticed some large recently harvested fields that were very tempting but I was determined to try not to land out (how I wished I had put on the 17mtr tips!). I thermalled down looking for lift until eventually I contacted a small thermal no more than 1000ft agl. I drifted with it over to Wherwell and spent an eternity looking down on the village cricket match and I was sure I could almost see the score on the board!
Pete in 737 called me to say that there was good lift between Andover and the club but the problem was I was 1500ft below final glide. Eventually I gained enough height to leave the thermal and push on back to Andover but all I found was sink again. Once again I found myself looking for a good field but as I passed over the new council dump on Walworth Industrial Estate on the eastern edge of town I contacted a strong thermal that peaked at 5kts, took me up to 2500ft and within final glide of Rivar.
Just goes to show that it doesn’t have to be a long flight to be memorable! Oh just in case you are wondering why there is not a photo of CBN ………….I was a little to busy to take one!